I'm a photographer based in Philadelphia, dedicated to creating images that celebrate, empower and inspire individuals, communities and organizations working for positive change in the world through their art, activism, or entrepreneurship. Everyone is Photogenic.

Now that the Air & Space Museum & NASA Archives have had a chance to select some things from Jacques’ collection, it’s your turn to get a crack at it, and help me figure out where the rest will go.

Become a backer via Kickstarter for your own box of space junk, and to help the rest of it find its’ future homes…

I’d hoped to be able to sort through his collection of amazing aerospace history artifacts before he died; the stories and memories and information about the collection would have been priceless, doing an oral history project around it would have been so rewarding.

But that wasn’t to be, and so I’ve been doing my best to sort through the aftermath of his life, and learning more about him through what he left behind.

It’s taken a good long while and there’s still a long way to go:

As he got somewhat overwhelmed, Jacques’ tendencies to archive & collect led to a classic hoarder scenario. The NASA artifacts got buried under and entangled with piles of newspaper.

It took me months just to get rid of the stuff that was clearly trash (filling a big dumpster and taking five cargo vans of paper to the recycling center along the way) – and now I’ve been able to finally reveal the collections and begin rough triage of it. 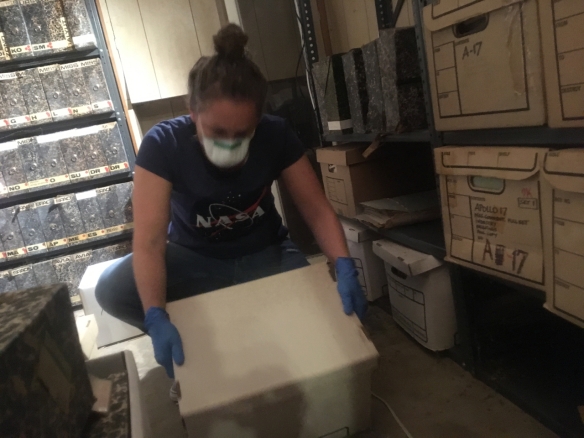 Most recently, I was finally connect with the chief archivist from NASA as well as a crew from the Air & Space Museum. They’ll be acquiring a large portion of the photographic & film collections & some other documents.

But there is so much left that they aren’t taking! So many things that he would have loved to share with you!

It’s tricky to figure out how to handle it. I could spend the next two years of my life running an e-bay store of aerospace treasures. Or I could burn it all and be done with it. (He told me that it would be my inheritance… and much of it is quite valuable… but so is my time…)

My gut instinct is to make it a kickstarter style crowdfunding thing where folks interested in aerospace history could chip in little bits towards the triage costs in exchange for grab bags of the memorabilia. It would be much easier to give the bulk of the memorabilia to interested folks that way rather than combing through it all and selling it piecemeal. But we’ll see.

If you’re still interested in this collection, let me know; I’ll keep you posted as I figure it out.

We’re preparing to put some first batches of collectibles from Jacques’ collection on eBay to find them new homes.

In the meanwhile, you can find out a bit more about Jacques and his collections. Stay tuned for some unique treats!